Tarmak is a toolkit for Kubernetes cluster lifecycle management. It focuses on best practice cluster security and cluster management/operation. It has been built from the ground-up to be cloud provider-agnostic and hence provides a means for consistent and reliable cluster deployment and management, across clouds and on-premises environments.

Tarmak and its underlying components are the product of Jetstack’s work with its customers to build and deploy Kubernetes in production at scale.

The Tarmak configuration uses Kubernetes’ API tooling and consists of various different resources. While the Tarmak specific resources (Providers and Environments) are defined by the Tarmak project, Clusters are derived from a draft version of the Cluster API. This is a community effort to have a standardised way of defining Kubernetes clusters. By default, Tarmak configuration is located in ~/.tarmak/tarmak.yaml.

Although we do not anticipate breaking changes in our configuration, at this stage this cannot be absolutely guaranteed. Through the use of the Kubernetes API tooling, we have the option of migrating between different versions of the configuration in a controlled way.

A Provider contains credentials for and information about cloud provider accounts. A single Provider can be used for many Environments, while every Environment has to be associated with exactly one Provider.

Currently, the only supported Provider is Amazon. An Amazon Provider object references credentials to make use of an AWS account to provision resources.

An Environment consists of one or more Clusters. If an Environment has exactly one cluster, it is called a Single Cluster Environment. A Cluster in such an environment also contains the Environment-wide tooling.

For Multi-Cluster Environments, these components are placed in a special hub Cluster resource. This enables reuse of bastion and Vault nodes throughout all Clusters.

All instances in a Cluster are defined by an InstancePool.

The Cluster-specific Terraform code is broken down into separate, self-contained Stacks. Stacks share Terraform outputs via the remote Terraform state. Some Stacks depend on others, so the order in which they are provisioned is important. Tarmak currently uses the following Stacks to build environments: 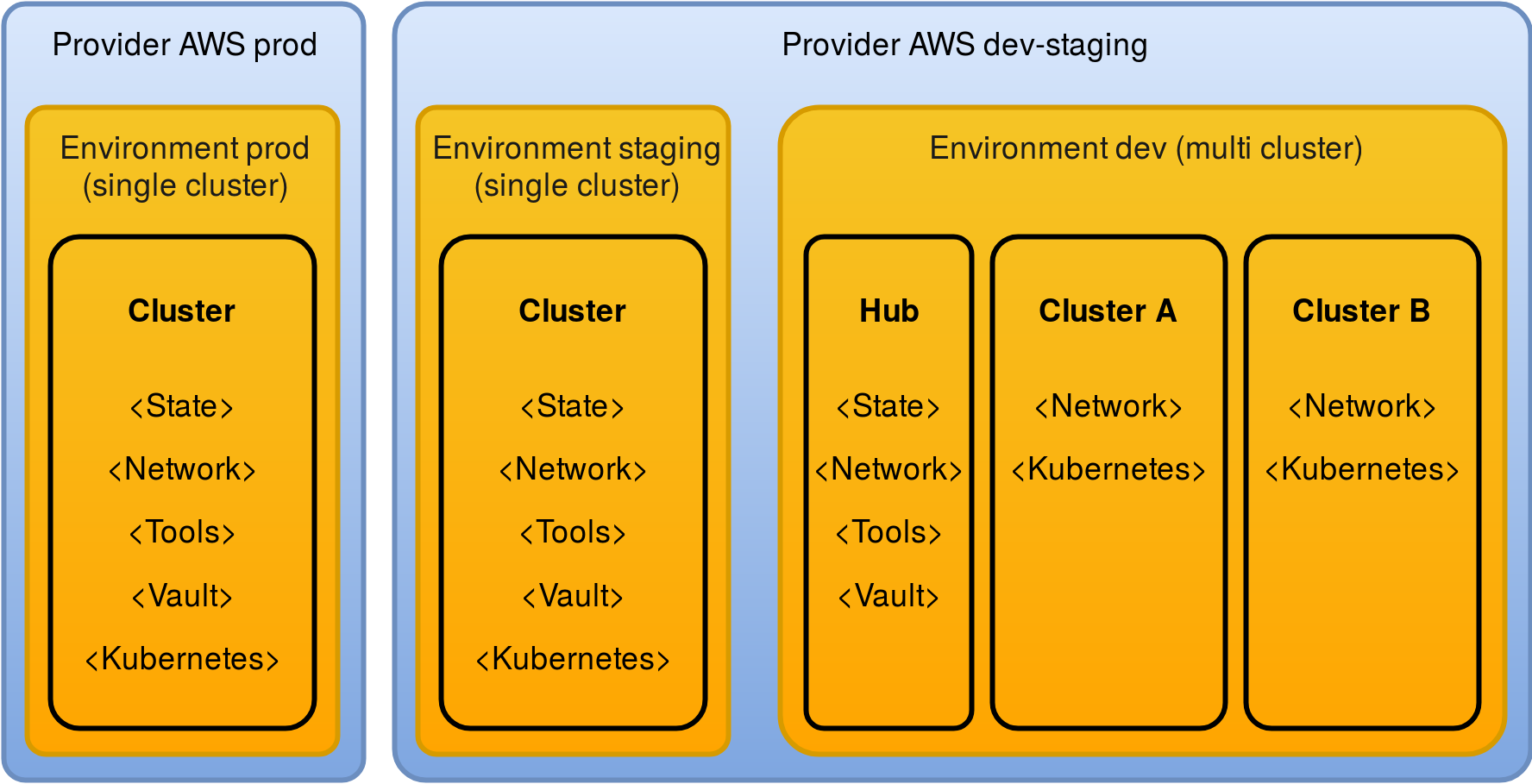 This is what a single cluster, production setup might look like. While the dev environment allows for multiple clusters (e.g. each with different features and/or team members), the staging and production environments consist of a single cluster each. The same AWS account is used for the dev and staging environment, while production runs in separate account.

Every Cluster contains InstancePools that group instances of a similar type together. Every InstancePool has a name and role attached to it. Other parameters allow us to customise the instances regarding size, count and location.

These roles are defined:

Tools used under the hood¶

Tarmak is backed by tried-and-tested tools, which act as the glue and automation behind the Tarmak CLI interface. These tools are plugable, but at this stage we use the following:

Docker is used to package the tools necessary and run them in a uniform environment across different operating systems. This allows Tarmak to run on Linux and macOS (as well as potentially Windows in the future).

Terraform is a well-known tool for infrastructure provisioning in public and private clouds. We use Terraform to manage the lifecycle of resources and store cluster state.

As soon as instances are spun up, Tarmak uses Puppet to configure them. Puppet is used in a ‘masterless’ architecture, so as to avoid the complexity of a full Puppet master setup. All the services are configured in such a way that, once converged, the instance can run independently of Puppet.

Why Puppet over other means of configuration (i.e. bash scripts, Ansible, Chef)? The main reason is its testability (at various levels) as well as the concept of explicit dependency definition (allowing a tree of dependencies to be built helping predict the changes with a dry-run).